I keep going to wonderful potluck dinners and I realized that there is a bit of a good “vibe” that a potluck in a home can gather. If you have somewhere bigger than a home, I can see how more people, food, activities, etc. could be good, but this is the way a great potluck looks in my mind’s eye…

Many people were invited, but around 8 to 10 total guests say yes and arrive – the potluck needs a variety of dishes but everyone needs to be able to listen to any particular great story. Ideally, no more than half of the people will be all close friends, because it’s so nice when some folks have to introduce themselves and there’s at least a little bit of chatter that is new to folks. I’ve been to a lot of potlucks where Husband doesn’t know how to talk to my former classmates, because he didn’t study what we did – it’s nice when someone else from a different stage of life or profession is there.

A variety of food and drink is always nice, and as my friend N says, it’s good to have more dishes and sides than desserts. At N’s latest potluck, there was a nice variety of food based in countries around the world, which meant there was a fair bit of oohing over curry and ahhhing over egg rolls. The food brought us into conversation about a special topic.

Husband loves parties where there are games to play, because it brings everyone’s focus onto one thing, while I love parties where we can talk all evening, really getting to know each other. We tend to mix these two in our parties, but I want to get better at bringing in party games like Table Topics, where both my chatter-focus and his game-focus can be satisfied.

I’m really excited to add my last, favorite element of a potluck this summer: the outdoors! A grill, a game in the backyard, and just watching the sunset or a crackling fire are definitive of summer time dinners. 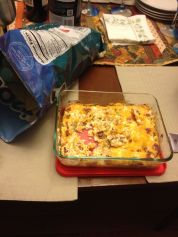 As for the best dish to bring to a potluck… that’s where I’m stumped. I’ve developed my go-to casserole for new parents, but my potluck game is pretty lacking unless I’m at home with my kitchen right there. Any favorite treats for a potluck? If you send me a link to the recipe in the comments, I’ll totally try them and tell you how they go over at potlucks this summer.

5 comments on “Anatomy of a Potluck”