I don’t actually like or crave eggs very often, which means that that it is hard sometimes to find variety on Whole30 – veggies are various, but inexpensive meat is pretty much restricted, and so eggs are a great way to get some more variety in your life.

My favorite way to eat an egg is in the middle of a piece of buttery crispy toast, so I needed a new way to enjoy eggs. I found the recipe for a Paleo Supreme Pizza Frittata , which claimed that mixing pizza sauce with eggs and baking them made a creamier texture on  the eggs – something like ricotta! As an unabashed lasagna lover, that was enough to get me to try it.

I mixed chopped onions, finely chopped broccoli, and frozen spinach with just a tiny bit of olive oil and set it to saute while I mixed eggs, spices, and some homemade tomato sauces together and and greased the pan with clarified butter. I heated the oven to 350, and after mixing all the ingredients together and putting them in, they got about 30 minutes at 350 and another 5 at 400 so that I could get a little crustiness on it.

The result was not ricotta in the mouth, but it was delicious, and not has heavy as eggs by themselves – I really enjoyed it! It was even tastier with a small spoonful of salsa on top to jazz it up – weird at first to combine italian and mexican palates, but still tasty to me!

On Sunday, I made a casserole intended to fill in whatever meals we didn’t feel like preparing this week – this seems like a tried and true “meal prep” for the lazy/busy. It turned out to be a great plan because I got sick on Monday and have been fighting a cold during these busy school days. Today, however, I am free of work (fall break!) and finally attempting recovery. Also telling you about the delightful casserole I made.

So, I tend to rely pretty heavily on cheesy foods when I’m cooking, mostly because of my love of it, but I challenged myself to create a casserole that wasn’t cheese-themed. What emerged was inspired by, though not truly similar to, this chicken bake that uses onion as a centerpiece instead of cheese: http://www.plainchicken.com/2015/10/french-onion-chicken-and-rice-bake.html?m=1#more thanks for the inspiration, Plain Chicken!

I started with wild rice and jasmine rice (bottom of the bag for each) and poured a big can of french onion soup over them. That went into the oven while I cooked the chicken in a frying pan with just a bit of olive oil to keep it from sticking. I was hoping that with so much soup, the rice would cook up nicely before I even added the other ingredients, and sure enough; I chopped veggies till the rice soaked up most of the soup liquid. I added what i had: an onion, 4 stalks of celery, two bell peppers, some tomatoes, and some leftover butternut squash soup, mixed it all together with the chicken once it was cooked, and layered it over the rice. For a crusty topping, I crushed a sleeve of saltines, mixed them with the chicken juices leftover in the pan, and then topped with those delicious crunchy onions that people use on top of green bean casserole. I used a lot of them, but mostly so that I wouldn’t singlehandedly snarf them as a snack.

Finally, I cooked it at 350 for about 40 minutes – while most of the elements were individually safe to eat already, I wanted the veggies to soften and the flavors to meld. In the end, the casserole was pretty low on the spicy-meter (i put some salt and pepper in, but nothing else) but Husband added his customary hot sauce and I mixed in a little barbeque sauce into my portion, and it was delicious. Honestly, I’m glad that it was a little bland, because when I’m eating the same thing for a lot of meals in a week, it’s nice to be able to re-season it slightly differently each time. It’s not as beautiful as perfectly portioned meal preps, but it has served us well through the days of my cold. 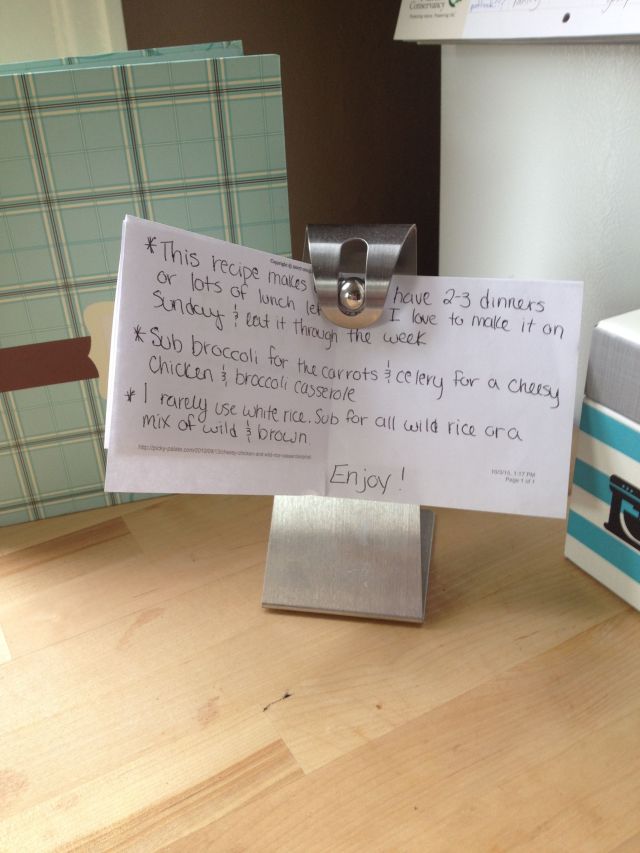 I spent New Year’s eve with B and her husband. She is Husband’s cousin, which means now she is my cousin too, and we had such a good time ringing in the new year – lots of foosball and charades and endless mounds of snack food. We all also wore fake mustaches and plastic new-years necklaces, foisted upon us by other relatives – a good time was had by all.

B teaches Kindergarten, which gives her this almost super-human level of maturity; she makes 25 tiny people productive and reasonable for hours every single day. Well, somewhat productive, and more reasonable than they would be any other way. Any casserole that B loves would have to be practical, and sure enough, she printed the casserole recipe out rather than writing it down (smart move; it’s a long recipe) and she annotated the bottom – she let me know that the recipe makes a ton of leftovers perfect for taking to work.

My husband and I both end up eating out at work at lot. Despite both having workplaces that respect our time, we find ourselves struggling to make food in the evenings, much less come up with a good plan for the next day’s lunch. Husband loves him some leftovers, and eats them faithfully when we have them, but I am not a leftover lady. It has to be the best food ever (read: saag paneer and garlic naan, if possible) for me to eat it the second day instead of making a sandwich or… well, or going out to eat.

B’s casserole, a homey and savory chicken, wild rice, and vegetable dish, is both delicious and versatile. While it truly does make a boatload of casserole, what it amounts to is a full meat-veggie-starch meal in one pan (or in our case, two, because I made too much rice…) so your serving size can be pretty generous. I estimate that ours has lasted two people two meals so far, and probably will last us both another two lunches.

I fully intended to take in-progress pictures, but I am new to this blog thing. Husband volunteered to help with the chicken while I worked on the rice, veggies, and cheese sauce, so instead of taking pictures we ended up singing along to the radio and trading spots in our narrow kitchen in order to reach pans and pots. Yes, I know, I cannot blame him for my forgetfulness. I’m blaming him for distracting me instead.

Our process went this way: first we started the rice, which required very little work but lots of time to simmer. I used black rice because I thought the wild rice at my grocery store was weirdly expensive and because black rice actually boils up purple, and come on… purple casserole! Husband began by cutting up and sautéing the chicken in olive oil, adding more spices than the recipe called for because he likes things a little spicy. I cooked broccoli and onions in olive oil with three cloves of garlic that might have already sprouted… we need to buy more garlic.

Once all of these things were well and truly on their way, I started the cheese sauce. Whenever I don’t truly and intensely mess up a roux, I’m very proud of myself, and this time was great – butter and flour to make that pasty, gravy-looking stuff, then bit by bit I added the chicken broth (actually the leftover liquid from cooking the chicken, thinned with one cup of water! mmmmm). It got away from me for a minute and I turned the heat down, but it was not ruined, and once I had the broth incorporated, I added the cheddar cheese and whisked it all smooth. The sauce pooled on top of the rice-chicken-veggie mix in our two pans, but once they were in the oven the cheese melted down into the casserole and suffused the house with a heavy creamy smell.

This casserole came out tasting like its parts, broccoli here or chicken there, but also just tasting warm – the cheese mellowed all the spices but didn’t make it flavorless, and I was satisfied after one reasonable helping and one small helping, which is pretty good for me. B offered the broccoli variation instead of carrots and celery, which would also be good – the only thing I noticed was that I made too much rice (not the recipe’s fault, since they measure in cooked rice), which meant some of it went into the fridge.

You’ll be happy to know I dug into my leftovers with gusto at work today – B may work with 5 year olds for a living, but for her to tame my lazy eating-out habit is quite a feat.

Because this recipe was originally drawn from another food blog, I will just link to them to send a little blog love their way; they have beautiful pictures and the exact recipe at the bottom! http://picky-palate.com/2010/09/13/cheesy-chicken-and-wild-rice-casserole/ 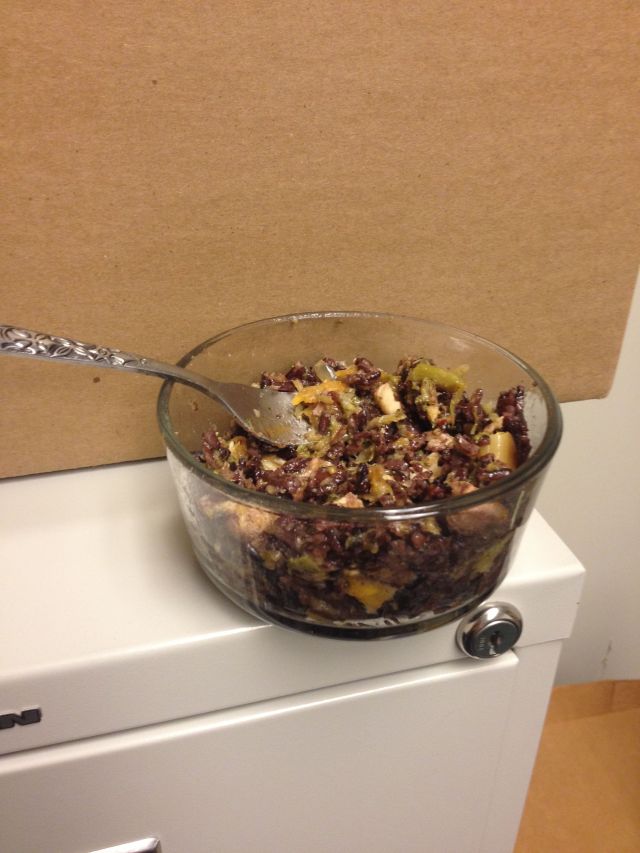