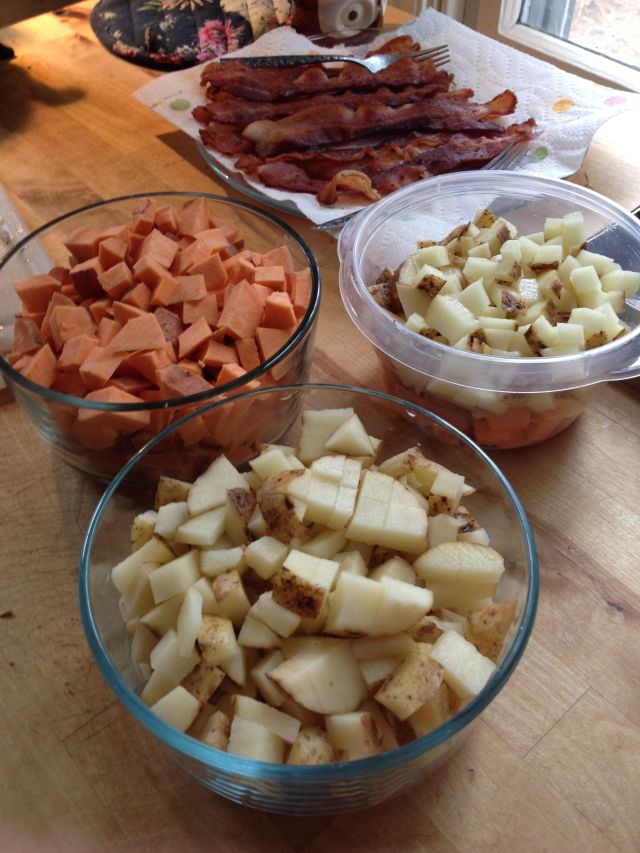 I think too many of us envision cooking as the cooking-show version: a row of delicate ramekins full of pre-measured, pre-seasoned, pre-cut foods ready to be poured artfully into a mixer or a pan. A quick statement of what you needed to do (chop, dice, mince, filet) is all you need.

These days, there are even faster cooking shows, where you don’t even see the cook but instead see a fast-forward version of the person cooking and adding everything, one thing per second. The final product shows up after less than 60 seconds, perfect and picturesque.

I think one of the things that keeps us from cooking more is that we only think of these as the way that cooking looks; real cooking is mostly chopping. I know that I am more likely to cave on the Whole30 month if I don’t pre-cut and pre-wash a lot of my veggies, but I don’t kid myself: I’ve signed up for a month of Sunday afternoons where I’ll be preparing food, making it so that my weekday schedule can fit healthy choices in. It’s a bit of an experiment too – Whole30 is so restrictive that eating in restaurants is difficult, so we’re aiming to not eat any restaurant food the whole month. Instead, some of the money that normally goes toward restaurant eating (because we love it) will be channelled into better, purer ingredients. Not because I’m always going to go organic or go grass-fed or go free-range – I’m just interested to see if I see a difference.

The other day, I prepped potatoes and sweet potatoes to have for meals later on that day and week. It was nice, because I didn’t really notice it. Like food channel cooks, I was able to pull out the things I needed, heat oil in a pan, and make my meal without taking the time to cut up veggies. I’m usually hungry by the time I walk in from work, so it’s a nice thing that I’m able to prep ahead and do a little cooking-show magic, but it’s not without the background cook, the person who makes all those lovely cuts – that person is me, just me on the weekend.