I haven’t been very innovative in my cooking lately, but these 6 things get me through the busy weeks with my sanity intact. What 6 things make your kitchen function?

There are obviously many other things in my kitchen, but these are the basics on which all the others depend. What are yours? 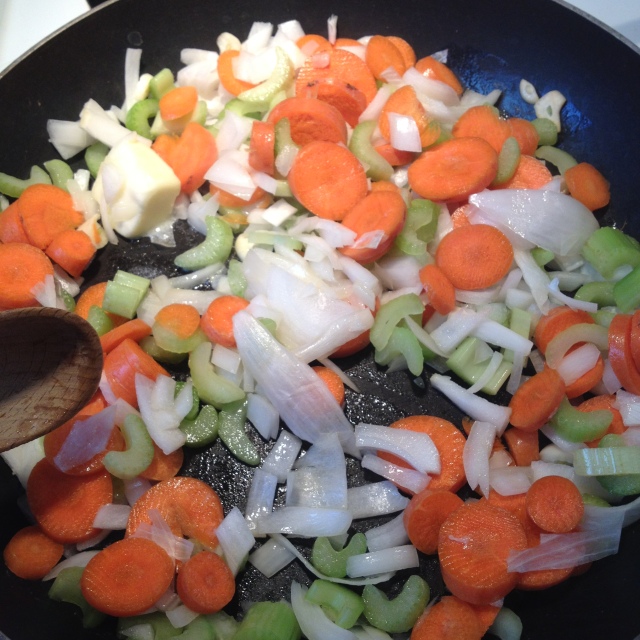 The key first step to a great soup or pot pie is this: a pat of butter, a pile of onions and carrots and celery, and the exquisite heat that brings their flavors together. Veggies are beautiful in many forms, but I’m especially grateful for this combination when holidays are coming around – so comforting and fresh smelling and savory! 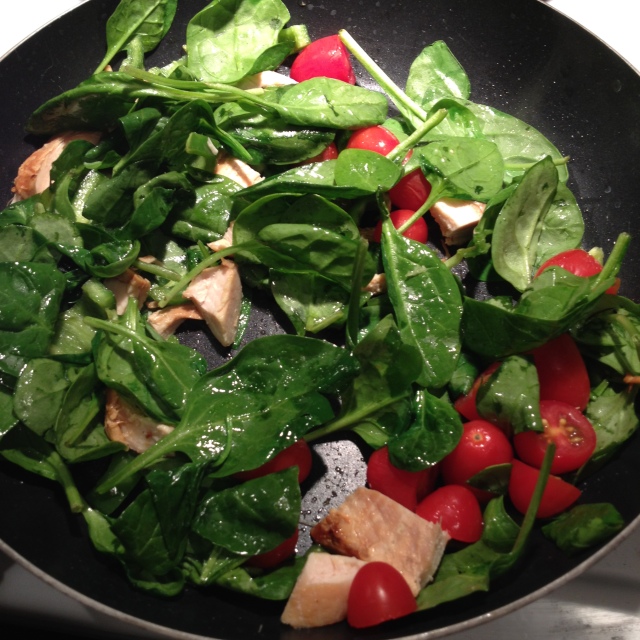 Whipped up in a hunger-induced tizzy on Thursday night, this mix of leftover veggies, chicken, and rice was covered (not with salsa this time!) with the pepper jack cream sauce I devised in 28. M’s Fiesta Chicken/Arroz con Pollo – so tasty! I’ve been quite happy with the way we tore through the leftover enchiladas, leftover chicken, and now, most of the leftover rice and salad… Parties may feel like they cost a lot, but you’ve got to factor in the delightful leftovers for a week to come!

I have lately been cutting meat all over the place – not avoiding it entirely, but switching to less of it. HOWEVER. Husband will stand for only so much of this, and I sometimes choose to add meat or fish back into the diet for his happiness. In this case, I was able to choose a perfect combo: by picking shrimp, I satisfied his desire for tasty proteins, but because shrimp ain’t cheap, he could accept the smaller portion. Marriage, it seems, is a never-ending negotiation and compromise.

In the case of shrimp, though, it’s a delicious compromise. Starting with a big pat of butter, some garlic, and some pepper flake, I sautéed the shrimp from thawed-and-gray to hot-and-pink. The sauce was thinner than I wanted, perhaps due to some water still left in the package from the thawing process, so I turned to my trusty dusty chickpea flour, as well as a little parmesan and Colby jack cheese, until the sauce was thick and yellow and garlicky, the way I wanted (if not exactly the traditional, gorgeous scampi sauce that I was loosely emulating, at least at the start. If you want real scampi, there are many, many recipes).

The scampi was served atop the tomato farro I discussed earlier this week, providing a fibrous and tasty base. The excess sauce enriched the tomato, which was flavorful but not creamy. Husband and I both fell on the bowls with abandon, but when the time came to decide about seconds (we’d snarfed half of what I made), Husband surprised me by holding back. “I want to eat it,” he said. “But I want to be able to have it for lunch tomorrow.”

I know Husband just wanted tasty food the following day, but I cannot help drawing a parallel: the reason I want to eat less meat and animal protein of all kinds isn’t from some dislike for them. I just want there to be some tomorrow; with the evidence of how much more energy it takes to produce meat, it makes sense to use less meat and more carbs as we try to transition to cleaner energies and to walk lightly upon the earth. I don’t think you have to be a tree hugger (though I might be one…) to see the benefit to using slightly less energy in our lives, on the off chance that it will help us have more to use in the future.

We didn’t have plans, for once, on a Sunday. I figured we’d do what we always do – some puttering around the house, some cooking, some home repair and lawn maintenance. But it was perfect outside: breezy and sunny after a week and a half of nearly constant rain.

We knew there was a state park less than an hour away that we have been meaning to visit for a camping trip, and I figured we’d be more likely to get there and actually budget time for a trip if we saw how nice it was on a day like today. So we threw whatever food seemed reasonable at the time into the car, along with swim gear and headed down to the park.

We swam for what must have only been an hour but which felt like so much more; the bottom of the lake was delightfully sandy and no creatures touched my legs, which made me quite happy. We dried off in the sun and turned to snacks, and realized we’d only brought two apples, two purple peppers, and a whole, enormous cantaloupe. Well, also some bratwurst to cook on a mini grill, but those took a little time.

Sometimes I think that the reason kids don’t grow up learning to love fruits and veggies is because they eat them indoors; if you sit down at a picnic shelter and hack a cantaloupe in half, then spend the afternoon digging bits of it out with a spoon and drinking the accumulated juice straight out of the cantaloupe bowl… you just can’t help but love it. The purple peppers had been an impulse purchase at the farmer’s market, and they were a bit more bitter than most bell peppers, but they were a nice contrast to the cantaloupe. Slices of crisp granny smith apples added another texture, a tart flavor.

I’m facing down a real doozy of a week, and we came home to more work and a few chores that still need doing, but today, like that wide cantaloupe half, was very sweet indeed. Though eating the bratwurst was far more filling, the fruits and veggies eaten in the late summer sun were the highlight of my day.

So, I recently made an amazing discovery: with a bunch of veggies, some spices, and a secret ingredient, I can make a sauce that is super savory, convinces me that it’s creamy, and makes rice, toast, other veggies, chicken, you name it taste wonderful. You need a food processor to work this magic, but I assure you, it’s worth it.

General Directions for the Veggie-Packed Sauce

Serve over rice, flatbread, chicken, on toast… anything! Obviously, this is too vague to be a mantra in itself, but the principle of sautéed veg+oil+chickpea flour+spices seems to be working for me lately. I added just a little shredded pepper jack to mine, though it was tasty without it so you can totally keep it dairy-free!

While I didn’t make this as a curry, I was inspired by the way that curries and other Indian sauces are so flavorful that you can use them to flavor other, more bland parts of the meal, like the bread or the rice. I am quite happy to be able to add so much nutrition to my rice and take it to work with me!